UPDATE: The issue seems to have been resolved in DisplayLink Core Software version 7.9.1336.0. It might have been fixed in earlier version but I have tested only 7.9.1336.0.

Soon after setting everything up, I received Office documents (Word/PowerPoint) in email. As usual, I clicked the document and expected the preview to load inline in Outlook. Instead, I was presented with the following error dialog which flashed by rather quickly:

I also noticed that in Outlook preview pane it reported “this file cannot be previewed because the previewer has been disabled”. This seemed to be limited to Office documents (Word, PowerPoint) as I was able to preview PDF files without any errors.

I decided to save the file to disk and see if that resolved the issue. Not to much of my surprise, The file failed to open in Word when launched from local disk. The error stated “Word experienced an error trying to open the file”. As you can see in the screenshot, the suggestions weren’t useful and not pointing to the right issue (I know this because I tried those suggestions):

My natural tendency when I download files from Internet or other unknown source is to unblock them if I have good reason to trust the source. So I decided to look at the properties of the file I had saved from Outlook, and as expected, the file was blocked: 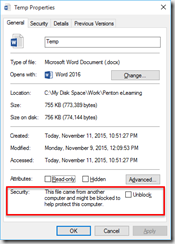 Microsoft explains this protective behavior in this article: http://windows.microsoft.com/en-US/internet-explorer/download-files#ie=ie-11. I am sure there are ways to override this default behavior, but since it would make your PC less secure, I would rather not teach you how to shoot yourselves in your foot. Better safe than sorry!

As you may have guessed already, the solution was simple. Since I trusted the sender, I unblocked the file and Word opened the file happily.

Sadly, I decided to live with broken preview experience in Outlook until I can get the previewer to succesfully open attachments in protected view. I didn’t want to disable protected view as that would compromise security of my setup. I was asked to try disabling hardware acceleration in Office programs, which I tried, but that didn’t fix the issue.

Painful as it is, I not only experienced this issue on one, but two of my laptops! Now it was bugging me more than it should! On my brand new Surface Pro 4, right after installing Office and nothing else (no additional plugins, no other third party programs etc.), I was still experiencing the problem. I even reset my Surface to factory default image (talk about painful and time consuming!) and tried installing Office from ISO image instead of my Office365 subscription (Click to Run version). Something caught my eye as I was going through this setup.

Can it really be my sofa! I mean really, how stupid would that be! But then it clicked. My sofa did not have Targus USB 3.0 docking station ACP71USZ but my home office did! Since I did not have the dock on sofa, I had not installed the drivers after resetting my Surface to fresh OS install. And everything was working as expected. Now, I went to town, installing all my required software including third-party bits. And I was still able to open attachment preview in Outlook and open documents from my SharePoint libraries. Now it was obvious.

I took my Surface to my home office and attached it to the Targus USB 3.0 Dock. The drivers installed automatically and I rebooted the Surface after drivers installed. Do you want to guess what happened next? Yes! I was unable to open attachment preview in Outlook and was unable to open documents from SharePoint libraries! Simply undocking my Surface did not solve the issue either. I literally had to remove “DisplayLink Core Software” which was version 7.9.630.0 at the time of this writing. And after removing it, all problems were gone!

I guess I should be working more from that comfy sofa than my elaborate home office setup! Or replace that Targus dock with something functional.

Don’t get me wrong, the Targus dock has served me well over past couple of years. However, the new driver along with Windows 10, is a deal breaker. And I love Windows 10 so the dock has to go. I suppose I can wait for driver fix from DisplayLink. But then again, Microsoft Surface users have been waiting for wireless fix (where slow speeds rule and 2.4 GHz networks are preferred unless you force the marvelous “Marvell AVASTAR Wireless-AC Network Controller” to use 5GHz band only, which has its own issues for mobile professionals like me!) since release of Surface 3. The issue persists on Surface Pro 4 as well! So I wouldn’t risk holding my breath for DisplayLink or Microsoft fixing this compatibility issues anytime soon.